You are here: Main 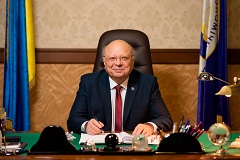 Rector's scientific interests include strategic management of the enterprise, development of higher education, development of economic education in Ukraine on the basis of competence and student-centered approaches, regional economic development, economic-mathematical methods and models and modern information technologies.

Professor Volodymyr Ponomarenko is the author of more than 340 scientific and teaching works, including in English and French language: 92 monographs, 116 scientific papers, 50 textbooks and tutorials. Under the leadership of Volodymyr Ponomarenko, ten adaptive electronic textbooks were developed, and in 2014, at the exhibition of achievements of Higher education of Ukraine, conducted by the Ministry of Education and Science of Ukraine together with the Academy of Pedagogical Sciences of Ukraine, a grand prize was awarded for innovative methodological developments.

Volodymyr Ponomarenko actively participates in the certification of scientific and pedagogical staff, including 16 years heads the specialized scientific council and for more than five years is a member of the Certification Board of the Ministry of Education and Science of Ukraine. He has personally trained 19 candidates and 9 PhD.

For many years of effective scientific and pedagogical activity, a significant contribution to the cause of education and upbringing of student youth, the training of qualified specialists Volodymyr Ponomarenko was awarded the title of Honored Worker of Science and Technology of Ukraine (2003), and was awarded the Order of Merit of III and II degrees (2007, 2011), Honorary Diploma of the Verkhovna Rada of Ukraine (2004), Government of France with the Order of Academic Palms (2013).